What Is Coke Fuel For Blacksmithing? Is It the Best Choice?

To some, blacksmithing may seem like a skill from the past that is not needed in modern society.

Today, blacksmithing may not be a standard profession but is still in practice by artists that use many of the same tools and methods that have been used for hundreds of years.

These days, blacksmiths are still using the same methods for heating their forges as craftspeople did long ago.

What is coke fuel for blacksmithing? When blacksmiths discuss coke fuel, they are talking about the resulting product or clean fuel that is made when coal is processed. Coke is essential as fuel in steelmaking, and it is created by burning the coal until the impurities are baked out, leaving the purified coke behind.

Read on to discover the history of coke fuel and the different recommendations for the quality of coal and coke.

Where Coke Comes From

There are different grades or quality levels of coal. Coal is hydrogen, oxygen, sulfur, and nitrogen.

Coal is ranked according to how much water is in the coal, among other things. A higher ranking means there is less moisture and volatile matter and that it gets hotter.

Not all coal is excellent for making coke fuel. There is a standard set for moisture, sulfur, tar, ash, and volatile content.

Volatile content refers to the coal gas and coal tar. In the United States, there has been a demand established by the steel industry to create coke for foundries.

According to Roger Schlueter, the Department of Energy recognizes the need for coke for removing oxygen from iron ore, smelting phosphate rock, and for blacksmiths.

Because the coke has been purified, the resulting fuel burns hot and smokeless.

The fact that the fuel is smokeless is essential to those in the steel and blacksmithing industries because of the dangers of breathing in coal smoke.

Blacksmiths tend to prefer coke from bituminous coal because it is mid-grade and burns very clean.

It also has a lower sulfur content, which is important because sulfur is not only a pollutant, but it can also contaminate the metal.

When this coal smolders, the impurities burn out, leaving carbon, which is referred to as coke. Once the coal is reduced to coke, it burns hot and is used to heat metal in the forge.

Different Options for Coke as Fuel

Generally, bituminous coal for blacksmithing is prepared to be uniform and clean so it will coke perfectly after burning for a while.

Three different types of coal are best for blacksmithing because they can reach the temperatures necessary to forge steel. These are called lignite, bituminous, and anthracite coals.

Bituminous coal will become coke naturally as soon as the volatiles burn off. As the coal turns to coke after burning for a few minutes, the forge has coke in it, and you are ready to go.

However, as the fire thins out, you will want to ensure you have more coal banked to the sides of the fire.

This way, you can pull it towards the middle as the coke burns up when you need to replenish the fire.

How Is Coke Made Industrially?

If you prefer to work with ready-made coke, the process is the same for creating coke from coal only at an industrial level.

How a Forge Works

A forge is like a hearth used by blacksmiths to heat metals.

A blacksmith needs to heat the metal before working with it, and when the metal is heated, it can be shaped by striking it against an anvil with a hammer.

A forge needs an energy source, such as coke, and a flow of air to increase the heat even further.

Tips for Using Coke as Fuel for a Forge

Starting and Maintaining Coke in a Forge

Coke can be tough to light, but there are a few ways to make sure your coke heats up properly.

Some blacksmiths start with a wood kindling fire above the air source.

Some blacksmiths use a wood fire, but they add some balled up newspaper to the forge with small bits of kindling.

Black Bear Forge has a fantastic video to help those new to blacksmithing start and maintain their fire in a forge.

Burn Time of Coke in a Forge

There is not necessarily an easy answer for how long coke will burn in a forge because the time is impacted by several factors.

There are different forges on the market, each with their own design. Many people choose to build their own forge, which I provide details to in my guide on tools for a beginner.

Also, forges are designed with airflow that affects how hot the forge becomes. If the coke is burned at a hotter temperature, it will burn quickly.

When you are done with your forging session, be careful as you clean out your forge.

If you carefully separate the coke from the remaining coal, you can save it for next time.

Coke weighs less and feels different than coal, so it is easy to distinguish between the two.

Blacksmithing may seem old fashioned since society moved to industrially crafting steel a long time ago.

However, the quality of metal forged with intent, skill, and purpose using techniques handed down from generation to generation is inspiring and reminiscent of simpler times.

A large part of blacksmithing involves having the right equipment for what you’d like to craft with metal.

A forge is critical, as is fuel. There are many choices for fuel, as well as the forge itself.

For fuel, many blacksmiths work with propane, wood, charcoal, coal, and coke.

Coke is the result of coal being burned in a low-oxygen environment. Coke burns hot and clean since all the volatile material is burned off.

It can be a little difficult to get burning, but there are several tricks to get it going.

Some blacksmiths will use coal for fuel because it turns to coke as it is being burned. It is a little easier to light, and the remaining coke can be saved for the next project.

One last tip: I’ve found The Everyday Blacksmith by Nicholas Wicks to be incredibly useful and informative. 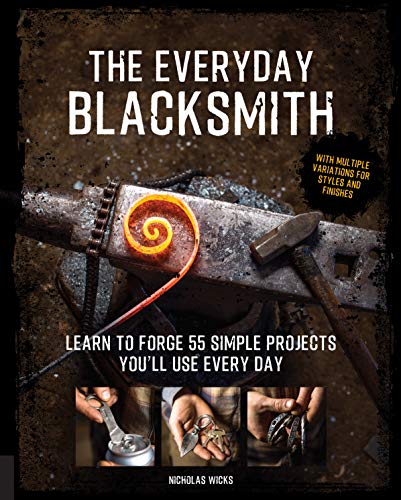