For a lot of people, ‘Dungeons & Dragons’ has been a hard thing to describe. I can’t tell you how many social environments I’ve been where I say “I play D&D” and a bunch of normies will be like “How does that game even work? What’s that like?” I didn’t have anything to really describe it that didn’t make me sound like a crazy person – Matthew Mercer

When Dave Arneson and E. Gary Gygax unleashed Dungeons & Dragons on an unsuspecting world in 1974, they had no idea that they were going to change the history of gaming (and geek culture) forever.

An escapist refuge from the trials and harsh realities of the world for many children, teenagers, and adults alike, Dungeons and Dragons is a social game based on interaction with other players that encourages and thrives on its player’s ability to make lifelong, lasting friendships.

Having spawned a globally famous cartoon, three films, and been at the epicenter of the infamous ‘Satanic Panic’ of the early 1980s, ‘Dungeons & Dragons’ is one of the most recognizable brands in the world.

But without its players, it would have withered and died a long time ago.

Dungeons & Dragons players are, without exception, a breed apart.

We come from all walks of life and listen solely to the beat of our own drums, but the one thing that binds us together and unites us is our passion for the hobby that we share.

Having felt the sting or many fumbled die rolls and joy that a critical hit brings and having been a devoted Dungeons & Dragons player for more than three decades, I have a keen insight into the things that make a player’s heart sing with joy and know what makes them happy.

How could I not? I’m a player myself and know that the things that would bring unmitigated levels of happiness into my life would also give other players cause to rejoice and celebrate all that is good within the Forgotten Realms.

That’s why I’ve put together a list of the best gifts for D&D players so that you can put an immovable smile on the face of the special player in your life.

Are you ready to join me on your quest for that special gift?

Then pick up your D20, for the adventure is about to begin…

Review of The Best Gifts For D&D Players 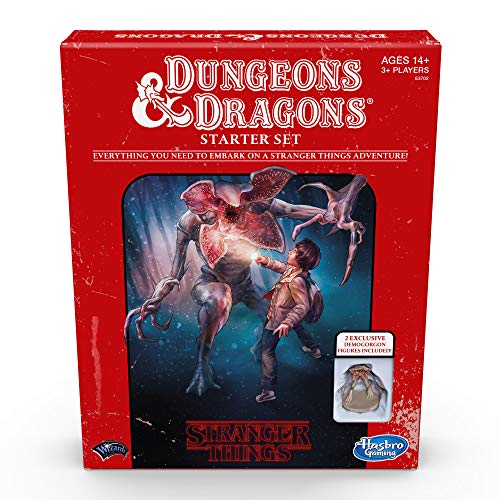 Unless you’ve been held prisoner in the darkest cell in the bleakest castle that’s located in a blighted, lost swamp in a remote, unreachable kingdom, you’ll know that ‘Stranger Things’ emerged from nowhere to capture the imagination of millions of fans all over the world.

And the game that lies at the heart of the show that the plot and story are based on and built around? That would be Dungeons & Dragons.

To celebrate ‘Stranger Things’ staggering success, Wizards of the Coast commissioned and released a Dungeons & Dragons Starter Set that features a specially designed adventure that mirrors the one that the central characters in the show’s first season undertake at the bequest of their Dungeon Master, Mike Wheeler.

The game includes a rule book, a set of six dice, the ‘Hunt for the Thessalhydra’ (the adventure “written” by Mike Wheeler), character sheets, and everything else that you need to begin your adventures in the worlds of Dungeons & Dragons and Stranger Things.

Seeing something that we love celebrated onscreen in such a faithful and authentic way drew legions of Dungeons & Dragons players to Stranger Things, and almost overnight, we all became fans of the show.

We’re willing to bet that the player you’re looking to buy something special for loves Stranger Things almost as much as they love Dungeons & Dragons.

This means that this game is an ideal way to fire two arrows at the same target and make sure that they both hit the gaming bullseye that lies within your player’s heart at the same time.

Other Great Gifts for D&D Players

Runner-Up: Of Dice and Men: The Story of Dungeons & Dragons and The People Who Play It 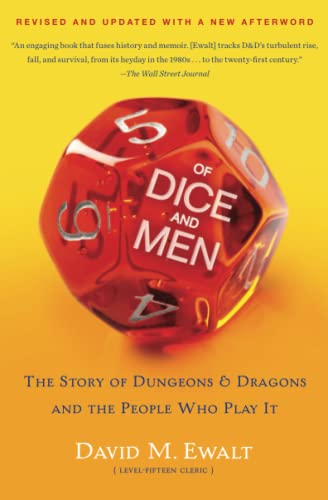 Of Dice and Men: The Story of Dungeons & Dragons...
Check Price on Amazon

Every story starts somewhere, and David M. Ewalt’s book is the most comprehensive and entertaining examination of the stranger than fiction tale of Dungeons & Dragons and its often turbulent history.

From its humble beginnings in a Wisconsin basement through to its meteoritic rise to fame, Ewalt’s book leaves no stone unturned in its quest to uncover the truth about D&D.

Written in a fluid, personable style that combines Ewalt’s adult rediscovery of, and renewed love affair with, the game that he used to adore as a child with an unflinching and incredibly well-researched biography of the game and the individuals responsible for creating it, this is a fascinating page-turner that will enthrall even the most casual fan.

More importantly, it’s a book about Dungeons & Dragons that the gaming community eagerly and wholeheartedly embraced and is recognized as being one of the definitive books about D&D.

Written by a player for players old and new alike, Ewalt’s book is a fast, fun, and immersive snapshot of the game and what it means to play it and be a fan of D&D in the 21st century.

It’s a story that D&D fans everywhere can, and will, immediately relate to. 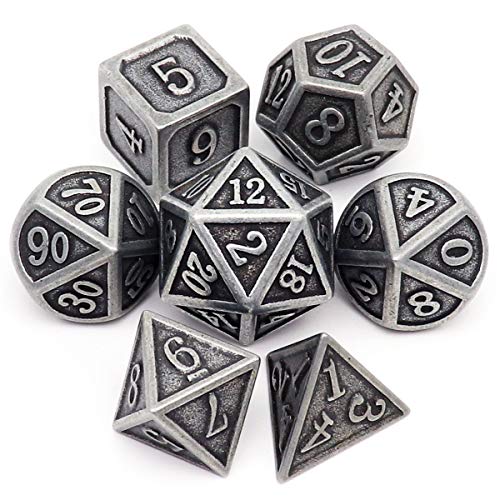 They’re the tools that help us to make the gaming decisions that our characters live and die by and they can alter the outcome of a game.

The direction and mood of an adventure can completely change with a single roll.

Dice are D&D player’s weapons of choice, and we can never have too many of them.

As individual as the players who wield them, D&D players dice are their calling cards.

This complete set of seven heavyweight dice have been recreated in a burnished, blacksmith style that will make any fantasy fan and D&D player’s heart flutter with joy.

Forged from eco-friendly zinc alloy, they’ve been made to feel comfortable in a player’s hand.

While they’re slightly smaller than standard plastic dice, thanks to the extra weight they roll as well, if not better, than their more common, standard gaming counterparts.

Dice are everything to a D&D player and there’s no better way to win or seal your place in the affections of a dedicated player than by presenting them with a set of dice that have been created to help them make a gaming statement of intent.

That’s exactly what Haxtec’s dice do. They make the sort of gaming statement that no players will forget. 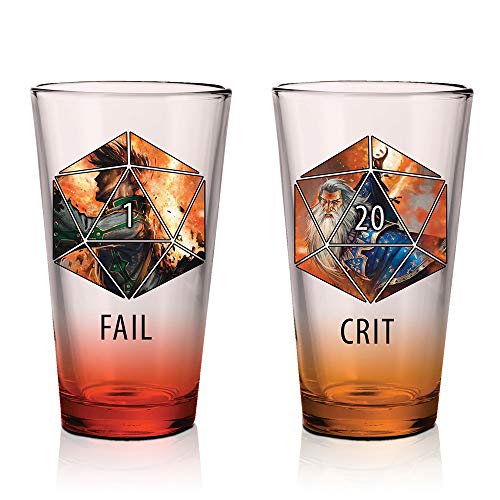 Adventuring is thirsty work, and that’s almost certainly why most campaigns and games start in taverns.

Because characters, much like their real-world counterparts, enjoy the chance to imbibe their favorite drink, whether that’s ale or soda, whenever they get a chance.

And this set of two pint glasses provides the perfect vessels that players can use to drink deeply from while immersed in their latest quest.

Every player knows the misery of failed rolls and the fumble and ecstatic joy of the critical roll that makes the impossible possible.

These glasses celebrate both in equal measure.

Like flipsides of the coin, they’re a yin-and-yang combination that reminds every player that success and failure are always just a roll away.

They’re also a great way to indulge in the secret drinking games that every player and their party has taken part in at one time or another.

Made from extra thick glass to ensure that they survive even the hardiest campaign, these pint glasses will weather the storms of many a game and will satiate even the thirstiest of ale-happy appetites. 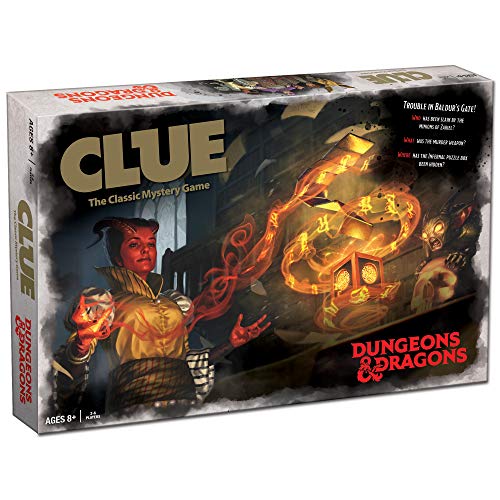 While their heart will always belong to Dungeons & Dragons, the one thing that every D&D player loves to do more than anything else is play games.

It doesn’t matter if the games are complicated, whether they last for an hour or a week, or how many players are involved, if there’s a game that can be played, a D&D player will play it.

If that game is even remotely related to Dungeons & Dragons, they’ll be drawn to it like moths to a flame.

In this popular version of the multi-generational-classic Clue, it’s up to the players to discover which member of the party has been replaced by a devil as they trek through the Forgotten Realms on their way to Baldur’s Gate.

In a game littered with murder, stolen artifacts, and mystery, the fate of the kingdom once again rests with the bold adventurers who must use all of their wits, wisdom, and skill to uncover the enemy among their number before its too late.

There’s a reason why Clue and Dungeons & Dragons have transcended trends and found favor with gamers for decades.

When both of those reasons are combined in one irresistible package, there isn’t a gamer alive who will be able to ignore their call.

Some things were just made to go together: Laurel and Hardy, apple pie and ice cream, and Clue and Dungeons & Dragons. They’re a perfect pair.

Which Gift Is the Best One for My D&D Player?

Speaking as a lifelong player, I can honestly say that there isn’t a single gift on the list that I wouldn’t be delighted to receive.

The only thing that really separates them is the budget that you have to spend on your gift.

That said, if you wanted to know which gift, as a player myself, I’d give to another D&D player, I’d always choose my default setting and give them the gift of dice.

Because if there’s one thing that no player can ever have too much of, and will always need, it’s dice.

What Is Dungeons & Dragons?

Devised and created by Gary Gygax and Dave Arneson in 1974, Dungeons & Dragons is a fantasy role-playing game that was originally published by TSR (Tactical Strategic Rules) and is now published by Wizards of the Coast.

In Dungeons & Dragons, or D&D as it is more commonly known, players assume the roles of characters and are guided through a fantasy world by another player, known as a Dungeon Master, acting as referee.

The Dungeon Master and players form a co-operative, and together they embark on adventures in which they solve mysteries, gather treasure, and fight monsters.

The decisions that the players make and the battles they indulge in are governed by dice rolls which determine the players’ success or failures.

Notable for using 20-sided dice and brought into mainstream consciousness by being heavily featured in the globally successful Netflix series Stranger Things, Dungeons & Dragons, is now more popular than it has ever been at any other point in its 46-year history.