What Is a 3D Printer Kit? Explanation, Pros & Cons, Prices 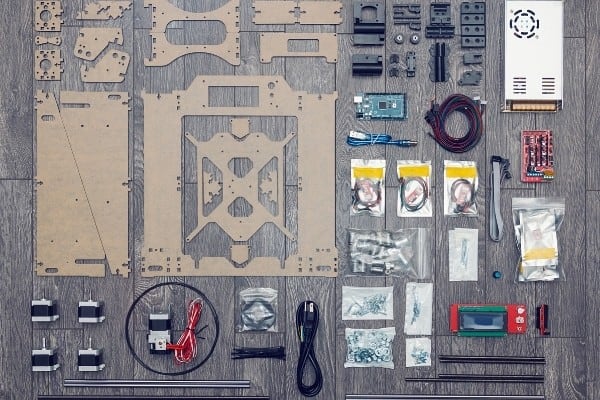 How bizarre it is that we live in a time where we can print fully functional and incredibly intricate items from plastic and metal, and we can even do this in the comfort of our own homes.

In fact, there are now DIY 3D printer kits available for purchase, but what exactly are these?

What is a 3D printer kit? 3D printer kits are DIY assembly kits containing all the components required to build a fully functional 3D printer. Kits are cheaper than pre-assembled printers, and the build gives you a good understanding of how your printer will work. However, they can take 4-8+ hours to assemble.

In this article, I will answer all of the questions that are foremost in your mind when you think about 3D printer kits, including:

3D printer kits are DIY assembly kits in which you get all of the individual components of a fully functional 3D printer, but you have to piece all of the components together.

Sometimes, assembly kits do not come fully broken down.

Instead, they include a few pre-assembled parts, and you are only required to connect these parts together.

However, purist 3D kit enthusiasts do not consider these to be real kits.

Is Everything Included In A 3D Printer Kit?

Every component of the 3D printer should be included in the purchased kit, along with some spare parts, just in case.

Some or all of the tools required to assemble the 3D printer kit can be included, but they are not always.

However, if any of the assembly tools are not included, you should readily be able to purchase them from a standard hardware store as they are pretty standard items like Allen keys or open-end wrenches.

In fact, you might already have these tools at home.

In your 3D printer kit, you will also receive an assembly instruction manual or a link to an online guide.

Depending on the 3D printer kit that you get, the quality of these instructions may vary.

However, if you find that your instruction manual is too confusing or quite basic, there are several manufacturer videos (for some printer kits), forums, and communities that you can turn to for assistance.

3D printer kits also usually include a basic software program, although you will probably want to invest in something more advanced as you start understanding how your 3D printer works.

How Difficult Is It To Assemble A 3D Printer Kit?

The degree of assembly difficulty for 3D printer kits depends on a few factors, including your level of skill, the quality of the instruction manual, and the complexity of the 3D printer you are trying to build.

On the one hand, if you have stumbled onto 3D printer kits and bought one to have a go at building something because you’ve never done so, then unless you have excellent intuitive skills, assembly may be quite tricky for you.

On the other hand, if you routinely build things with comparable mechanics, or if you have a good understanding of how 3D printers work, then it shouldn’t be too difficult for you.

If your 3D printer kit comes with an instruction manual that provides only a basic outline of how to assemble the printer or if the instructions are very confusing, then it can seem more difficult to build it.

A 3D printer kit for a printer with many functionalities, capabilities, accessories, etc. will have a more complex design and will be more challenging to assemble than a straightforward, basic home 3D printer.

Typically, the estimated time it takes to assemble an average 3D printer kit is 4-8 hours, but a skilled individual might be faster, while a beginner may take longer.

Ultimately, 3D printer kits are not designed to be so complicated that they can only be assembled by professionals.

Their very existence is geared towards the “Average Joe.”

How Much Knowledge Is Required For A 3D Printer Kit?

In terms of assembling a 3D printer kit, you can do it if you can read the instructions and search online for any additional troubleshooting and helpful videos.

You may get frustrated as you build your printer if you are learning everything on the go because you will be faced with problems that you have to figure out.

Depending on your level of knowledge, this may take a while, but it is not impossible, and the whole thing can be a gratifying experience.

To actually use the 3D printer that you have built is arguably more complex and requires more skills and knowledge.

However, you should not be discouraged or intimidated by this.

Most home 3D printer owners—and there is an ever-increasing number of these—are self-taught, so it is an attainable goal.

Pre-assembled or printer kits are not the only options when it comes to home 3D printers. You also have the option of designing and building a printer from scratch.

All3DP has put together an excellent list of the best DIY 3D printers or 3D printer kits available. Please see the below table, which summarizes the printers on their list.

Is It Cheaper To Build Or Buy A 3D Printer?

It is definitely cheaper to build a 3D printer than to buy one that is already assembled.

There is nothing wrong with getting a 3D printer kit if you are a beginner in the 3D printing field. However, you need to ensure that you are willing to put in the time and effort.

You don’t want to end up disheartened or frustrated to the point of giving up before you have even printed something.

On the other hand, once you have built a 3D printer, you will know more about 3D printing by the time you actually start builds than if you took the printer straight out of the box.

In this way, 3D printer kits are good for beginners who want to learn everything they can about 3D printing.

3D printer kits are DIY printers that you can buy and assemble at home.

They contain all the parts and tools that you need to build the 3D printer, as well as instructions on the assembly and basic software.

The ease of assembly depends on how skilled you are, how detailed and clear the instructions are, and how complex the printer design is.

However, you do not need to know everything about 3D printers before building one; you just need patience and the ability to find help on one of the many online platforms.

3D printer kits are cheaper than pre-assembled printers, and they allow you to learn about the printer as you build it.

However, there is more opportunity for functionality faults, and assembling the printer can take a long time.

Compared to building a printer from scratch, kits are easier because you have all the parts and the instructions. But building from scratch is cheaper and allows more customization.