What Are Scale Model Sizes? Complete Explanation [With Chart] 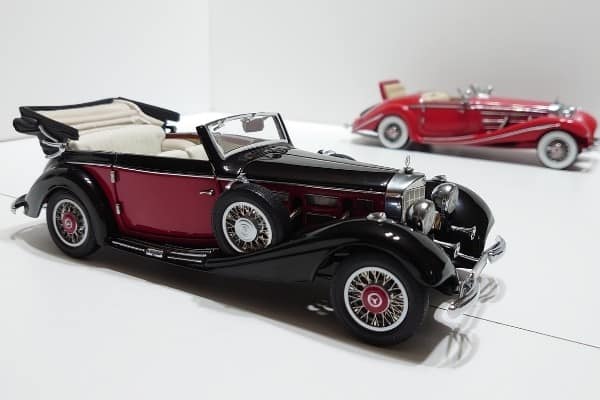 In the world of scale models, understanding the different scale sizes and what they represent can be tricky and often misleading.

There are so many different types of models, and there are dozens of different scale sizes that these models come in.

For every modeler, it is important to understand the differences between the scale ratios.

There are so many various types of scale models out there: everything from aircraft, ships, boats, cars, motorcycles, figurines, and even dolls, each of which is made to a specific size ratio.

Model scale sizes are not as complicated as they may seem; these are important figures to understand in the world of modeling.

Let’s go over what model scale sizes are and some of the more common scales sizes for different types of models.

Scale size is important, as the scale is not to make all models fit within a certain size parameter but to rather accurately represent the size discrepancies between various objects on a smaller, more home-friendly scale.

A full-size F22 Raptor fighter jet is not going to fit into your house, but a model that is 1/72 the original size (72 times smaller) will fit into the palm of your hand.

This is the importance of the scale size of models.

The size ratio that a sale model is built is usually proportionate to the size of the original object.

A very large object, such as an aircraft carrier, is often built in much smaller ratios, such as 1:700 scale, while more commonly sized objects, such as motorcycles, are usually made to be around 1:24 scale.

This may seem like a drastic size difference, but when the two models are placed side by side on a shelf, a 1:700 scale aircraft carrier is still significantly larger than a 1:24 scale motorcycle.

For this reason, many modelers build and collect models from the same scale size so that the relative size of the scaled objects stay true to the size ratios of their life-size originals.

Realistically, when it comes to scale models, the usable scale size ratios range from 1:4 at the largest to 1:720 at the smallest.

The most commonly used scale sizes range between 1:24 and 1:700 scale size.

There are some relatively uncommon scale sizes as well, such as 1:25 scale rather than 1:24 scale.

1:25 scale is usually used for cars and trucks and allows for very precise measurements.

Various scale sizes are used for various reasons, such as the standard unit of measure in various countries.

Countries that use the imperial system of measurement prefer 1:24 scale size, as 1 foot scales down to ½ inch.

In countries that use the metric system, 1:25 scale size is preferred, as 1 meter scales down to a perfect 40 millimeters, which is very easy to model with.

Even if the scale size ratio is a large number, the model itself may still be physically large.

Large scale usually refers to the actual size ratio of the model to the object, even though the model itself may not be particularly large.

This scale range is usually used for models of cars, trucks, aircraft, motorcycles, figures, and miniatures.

The scale ratios that are used in this range of models keep all models fairly close to their relative size compared to other models.

This range of model scale is also commonly used for aircraft and allows for very detailed modeling of incredibly large objects.

Small scale model size ratios are often used for modeling the very largest objects such as ships and super-aircraft.

While the size ratio is small, these models are often the largest in physical size compared to other models.

These model scales are often used for aircraft, boats, trains, some ships, tanks, and other large vehicles.

There are even smaller model sizes that range from 1:200 to 1:720, but these model scale sizes are not very commonly used.

Even though the ratios are high, the models themselves are physically very large, and not many collectors have the space that is required to collect models of this size.

While there are many different size ratios used for modeling, here is a shortlist of the most popularly used model scale sizes and what they are most commonly used for:

Scale models come in a great multitude of sizes, types, scales, and variations.

The most difficult to understand and arguably one of the most important aspects of modeling is scale sizes and their differences.

For example, if a model is 1:48 scale, that means that the model is designed and built to be 48 times smaller than the size of the original object.

There are commonly used sizes for various objects, but the larger the object usually means the smaller the scale ratio.

Many scale modelers collect models of the same or similar scale size ratio as this allows the actual size difference between objects to be accurate.

A jumbo jet and a Jeep in the same scale size ratio will be the correct relative size as they would be in their life-size muses.

Understanding scale model sizes is important for anyone who is getting serious about scale models, and choosing models that are the right size for you is vital!

So take your time when choosing which models you are going to collect, and bear in mind the scale size of your new model versus the models that you have already collected!