There are many card games, board games, and now dice games. We aren’t talking about Yahtzee either!

UNO has been expanding its hold on the game world by offering many different card versions and even UNO Attack!, which shoots cards at players.

UNO Dice is one of the dice versions of the game. With simple rules and quick hands, this game is sure to please players all around. Wanna play? Let’s get to it.

How do you play the Uno Dice Game? Players each have five dice and take turns rolling and matching them to the last die of the dice chain. This continues with multiple action options to help players reach their goal. The player who goes out first scores the point value from their opponents hand, and the first one to 200 points wins!

Now that we’ve covered a very basic description of the game. Let’s get into the details so you can walk into your first game a pro!

Uno Dice is a pretty simple game. There are 11 dice split between two players with one leftover. You’ll form one chain between both players in a battle to 200 points!

Anyone can play this game, and its quick rounds make for a sure no-hassle time! Here’s a breakdown.

Setting up the game is quite simple. You place the dice on the table. Each player takes five leaving one available for game play.

That’s it. Grab a drink and a snack. Talk some pregame trash. You’re ready to play!

As with any Uno game, there are action items in the game; only instead of a card, we have a dice. There are three actions found on the dice. I’ve included them below with the description.

Once you’ve got the dice all set up and ready to go, the game begins!

The first player out of dice gets all the remaining points in their opponent’s hand.

The winner is the first to score 200 points.

There are a few differences between the games here.

Uno Dice Roll, Match & Win has colored boards with squares on them. The players must use the dice to come up with a chain.

There are wilds that can be placed anywhere to help the chain grow and -1 and +1 penalties to be assigned to other players.

Instead of forming one chain between two players, Dice Roll, Match & Win has up to four different chains being built and color cards to keep track of the chains.

Uno Dice is a similar and simpler version of the same game with just one chain and no boards. Uno Dice has the same amount of actions with different meanings. 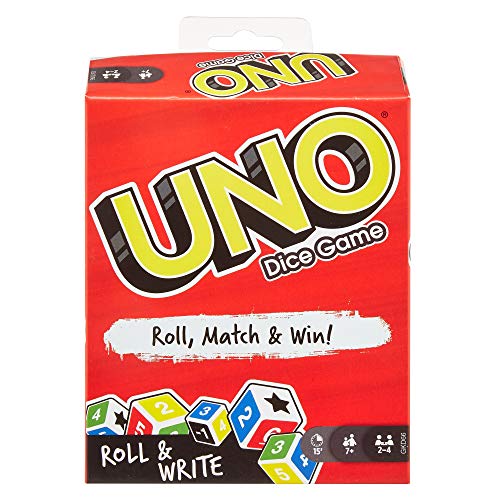 The youngest player gets the honors of starting the game with the play continuing in a clockwise direction.

Instead of building one line as with Uno Dice, each of the four players builds a chain with the dice on each of their turns in a race to complete their board first.

Before beginning actual gameplay, each player will roll a die until a number is face up. This number is written in the first box of their wipe-off board.

Players then take turns rolling the dice and creating a chain. The chains must begin with same number that was written in the first box of their board.

After that first die is matched, the chain may be built by matching dice with either the same color or number as the previous one.

On each turn, player has the option of rerolling as many dice as desired; however, this can only be done once per turn. Once a chain is completed, the player records the numbers on their board.

The play continues until the end of the hand.

Players in Uno Dice Roll & Write can adjust their chain at any time. In this game there are penalties: -1 and +1.

A +1 is assigned to a player and that player adds another space on their board and outlines it.  They now have one more number to roll than the other players.

Instead of yelling out “UNO,” Dice Roll & Write requires to have the last dice’s number and color called out.

The wild can be placed anywhere in your chain to help complete your board.

The winner of UNO Dice Roll, Match & Win is the first player to completely fill in all their spaces on their board.

We covered a couple different dice versions of UNO. You can choose one or maybe both to start with – that’s up to you.

UNO Dice is by far the simpler version. If you’re done with simple and want more of a challenge, then UNO Dice, Roll & Write may be the game for you.

Whatever you do while playing Uno Dice, please don’t forget to yell “UNO!” Nobody likes nearing the point of victory and having to take two steps back.