Monopoly Deal is a card-based version of the popular board game with the objective of obtaining property rather than money.

This article will teach you how to play Monopoly Deal and what the various cards mean as well as how to discard property cards and whether you can double double the rent or not. 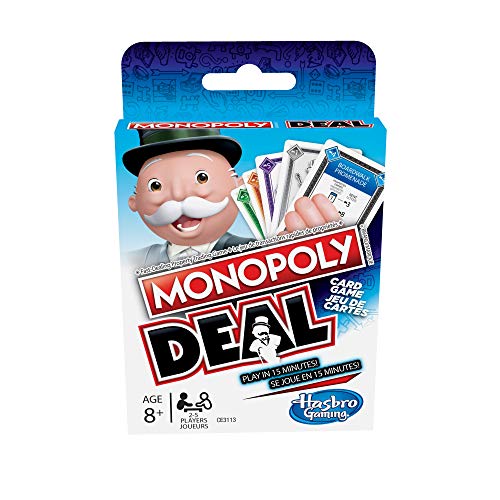 To start playing, simply shuffle the deck, and deal 5 cards to each player. The player to the left of the dealer goes first, and gameplay goes counterclockwise.

To play Monopoly Deal, first remove the 4 “Quick Start Rules” cards from the deck, then shuffle the deck, and deal 5 cards to each player.

The rest of the cards go face down in the center of the play area as the draw pile.

Monopoly Deal is a little different from the Monopoly board game and the popular Monopoly Bid card game, but it’s pretty simple to learn.

Each player picks up 2 cards from the draw pile during each turn. They can play up to 3 cards on their turn but don’t have to play all 3.

Players must have less than 7 cards in their hand at the end of their turn.

Also, their use does not constitute as a turn.

The player paying chooses how they make a payment. If you pay with property, the property card goes into your opponent’s property section.

If you don’t have the exact amount, the player you are paying gets to keep the change.

You can only make payments from cards laid on the table in front of you during your turn. If you don’t have anything to make a payment with, you don’t pay anything.

You can win with any 3 properties regardless of their colors.

You can play the Multicolor Property Wild card anytime, but you can only charge rent against it if it is played with another property card.

When you use a Deal Breaker card for a completed property set, you get any houses or hotels that are already on that property.

This also counts as a card played during your turn.

You can only charge rent on one of the properties in your property section.

The Wild Rent card forces the player of your choice to pay rent on the property of your choice from your property section. You can only charge rent for one color of property.

The Split Color Rent card can only be used if you have a property that has the same color that is on the card.

Once you play the card, all players must pay rent on the properties you choose of one of the colors on the card.

You can use more than one Pass Go card as long as you don’t go over 7 cards in your hand. The Force Deal card can be used on any properties regardless of their values.

A Force Deal or Sly Deal can be used to steal a house or hotel as long as it is not part of a completed set.

A house can only be laid on a completed property set and must be laid before a hotel can be laid.

How To Play Monopoly Deal

Shuffle the cards, and deal 5 cards to each player. Put the remaining cards face down in the center of the play area.

Play goes clockwise. Draw 2 cards, and play up to 3 cards on your turn. You don’t have to play any cards if you don’t want to.

Once you’ve made your moves, make sure to discard any extra cards so that you don’t have any more than 7 cards in your hand. The next player can then take their turn.

To win the game, be the first player to collect 3 full property sets of different colors.

Can You Discard Property Cards in Monopoly Deal?

Property cards are placed in your property section.

Can You Double Double the Rent in Monopoly Deal?

You can play two double the rent cards in one turn.

Monopoly Deal is a new way of playing a game that has been around since 1935.

The rules might seem a little overwhelming at first, but once you start playing the game, it is as straightforward as the original board game.