Uno Flip is a fun twist on classic Uno. Uno Flip has both a light and a dark side to the cards and contains unique action cards.

In traditional Uno, only one side of the card has instructions, but both sides of the cards are playable in Uno Flip.

What are the rules of Uno Flip? In Uno Flip you must get rid of the cards in your hand by matching them to the top card in the discard pile. You also have to obey the action cards, including a Flip card that switches the deck from its light side to its dark side and vice versa.

This article will teach you the Uno Flip rules as well as the ways in which the game differs from regular Uno.

You will also learn variations of the game and whether you can hide your cards in Uno Flip or win Uno Flip with a Wild card. 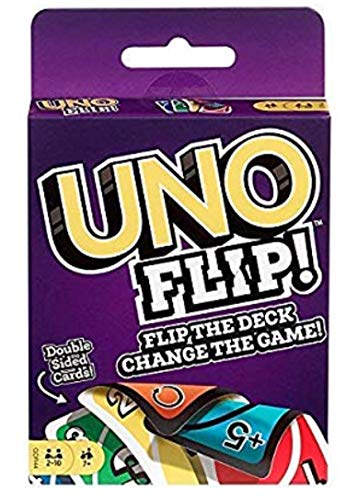 Uno Flip is an easy-to-learn and fun version of Uno that keeps you on your toes.

To set up Uno Flip, make sure all cards are flipped to the same side, then shuffle the deck and have each player pick a card.

The player who picks the highest number becomes the dealer and deals 7 cards to each player.

The dealer then puts the rest of the cards face down in the middle of the playing area to create the draw pile, flips the top card face up, and creates a separate discard pile next to the draw pile.

How Many Cards Are in Uno Flip?

There are 112 cards in Uno Flip, and each card has 2 sides, a light side and a dark side. The light side has red, blue, green, and yellow colors while the dark side has pink, teal, orange, and purple cards.

Both light and dark sides have numbers 0-9 as well as various action cards, including:

What Is the Object of Uno Flip?

The object of Uno Flip is to be the first person to get rid of all of your cards and make it to 500 points.

How Is Uno Flip Different?

Uno Flip has both a light and a dark side, and you play both sides of the cards, whereas in regular Uno you only play one side of the cards.

The light side of Uno Flip has blue, green, yellow, and red cards just like traditional Uno.

There are also 4 Flip cards in red, blue, yellow, and green that cause the deck to be flipped to the other side.

The dark side of Uno Flip has pink, orange, purple, and teal cards. The action cards are Draw Five, Wild Draw Color, and Flip cards.

All games of Uno Flip start with the light side, so make sure that all cards are flipped to that side.

Have each player choose a card, and the player with the highest number on the light side becomes the dealer. Action cards count as zero!

To get started playing Uno Flip, the dealer first shuffles the deck and then deals 7 cards to each player.

The player to the left of the dealer goes first, and gameplay goes clockwise until a Reverse card is played.

Match the top card on the discard pile by color, symbol, or number. You can also play an action card if you like.

If You Can’t Match

If you can’t match a card or play an action card, then draw a card from the draw pile. If you can play the card, go ahead and play it.

If you can’t play the card that you drew, then your turn ends, and it is the next player’s turn. You can also choose not to play any cards even if you do have a matching card!

A round ends as soon as one player runs out of cards in their hand.

That player is the winner of that round, and they get points from adding the points of the cards left in all other players’ hands.

Points are only counted for the side that the game ended on.

Whoever gets to 500 points first wins!

To win the game, you have to say “Uno!” out loud when you play your second-to-last card. Whoever gets rid of all of their cards first wins that round.

Rounds continue until someone gets to 500 points or a previously agreed upon amount of points.

If no one has won before the draw pile runs out, shuffle the cards in the discard pile, and create a new draw pile.

Dealing With a Suspected Cheater

If someone doesn’t say “Uno” when they are about to go out and are caught before they play their last card, then they must draw 2 extra cards from the draw pile.

Variations of the Game

You can switch the game up a little bit and play a different variation if you like.

Playing for Least Amount of Points

Have players keep track of their points for each round. As soon as a player reaches 500 points, have players tally their points, and whoever has the least amount of points wins.

Can You Win Uno Flip With a Wild Card?

You can win Uno Flip with a Wild card. The next player will still need to draw the amount of cards instructed by the Wild card after you play it.

The points from those cards will go toward the winner’s final score from that round.

Can You Hide Your Cards in Uno Flip?

You have to let players know when you have one card left by saying “Uno!” out loud so that all other players can hear you.

Of course, you don’t have to show others your hand during gameplay, but hiding any of your cards in an effort to cheat is against the rules.

Uno Flip is a fun and fast-paced card game that can be enjoyed by children and adults alike. Give it a try for a unique twist on an old classic.