Can I Fly Model Rockets More Than Once?

Flying model rockets is an enjoyable, exciting hobby, but as with anything else, it should always be done as safely as possible, especially if children are involved.

Each time you fly a model rocket, you have to use a brand new motor. Motors aren’t reusable, but what about rockets?

Learning more about how long engines last, proper engine storage, and whether or not reloadable engines are an option will help ensure your safety as you pursue rocketry.

Model rocket engines, which are also called motors, have a long shelf life. They’ll be able to last for many years if they’re properly stored.

So, if you want to buy a bulk pack of engines to save some money but you aren’t able to go rocket launching very often, you don’t have to worry about them expiring.

It’s very important that you remember that the key to an engine lasting for several years is proper storage. It’s true that you don’t have to worry about them going bad so long as you have them stored appropriately.

What Makes an Engine Go Bad?

An inappropriate environment will make a model rocket engine become unusable over time. Extreme cool or hot temperatures and moisture can contribute to an engine going bad.

If your engines are stored in these temperatures or the temperature often fluctuates, it can lead to the engine going bad.

Moisture will also ruin engines, which means that a humid climate can also cause a motor to not function correctly.

How Do You Know an Engine Can’t Be Used?

You will be able to tell that an engine can’t be used by visible damage. Types of damage you might see include:

If you see any sign of damage to the engine, don’t use it.

Using a damaged engine can be very dangerous and could cause injury to yourself and others when you try to ignite it.

Sometimes the damage isn’t obvious on the outside, but there could be problems on the inside.

If the engine you want to use is old and you’re unsure if it’s safe to use, the safest option is to dispose of it and not use it. It’s better to avoid an accident when it comes to model rocketry.

If you find a damaged engine in storage, take note of what type of damage it has so you can prevent it from happening again.

If the casing is loose or bulging, it was probably too hot. Cold temperatures will cause the casing to crack, and rust is a result of moisture, either from a water leak or exposure to humidity.

How to Properly Store an Engine

You might want to avoid storing them in garages, sheds, basements, and other areas that aren’t insulated because they can easily get too hot or too cold.

Don’t store engines in the same area as a heater or fireplace.

Exposure to fire will ruin the casing and also might even ignite it! This could easily cause a bigger fire and become a seriously dangerous situation.

Try to store the engines in the unopened packaging in which they came. By keeping them sealed, you can keep moisture away from them more easily.

Don’t keep the engines in an area that is exposed to moisture like a garage or shed, especially if you live in a humid climate.

Avoid storing the engines on the ground. Temperatures might fluctuate a little more or a water leak could soak the container you keep the engines in.

A shelf in a cool, dry place is the best place to store the engines since it will help keep them away from water and extreme temperatures.

Are There Reloadable Model Rocket Motors?

Each time you launch a rocket, you have to use a new engine. If you want to launch rockets all the time, the price of engines can start to add up.

Buying in bulk might save you some money, but you’re still spending quite a bit over time if you’re launching multiple rockets each weekend.

Is there a reloadable option that will save you some money? Yes, but these engines are typically made for higher class rocket engines.

Model rockets that are used by beginners and families are typically engine classes A through C.

These engines are low power, won’t launch a rocket to crazy altitudes, and are generally on the inexpensive side.

Since these engines are small and low power, they’re easier to manufacture and more affordable to produce. So, reloadable engines aren’t usually made for these engine classes.

Engine classes D and higher do have reloadable options. Mid-power engines are classes D through G and high-power is H through O.

These engines used to be custom made, but they weren’t easy to produce and could even be hazardous to make.

Plus, they were expensive to manufacture because unlike low-class engines, these couldn’t be made with cardboard.

Now, thanks to technological advancements, there are reloadable model rocket engines.

Reloadable rocket engines save money for both the manufacturer and the user.

The engine might be expensive to purchase, but you only have to buy it once, and the manufacturer doesn’t have to spend as much money making them since they don’t sell as many.

The reloadable engine is called the RMS – Reloadable Motor System. (Remember, “engine” and “motor” are interchangeable terms.) The RMS is the metal casing of the engine.

It has three parts:

Many people use grease to help create a secure and tight seal when they close it after reloading.

In order to refill a reusable model rocket engine, you will need a kit to refill it.

The casing of the engine is the part that you keep. Everything else that you put inside is disposable and can’t be used again.

Reload kits might contain different components depending on the manufacturer, but you will generally find the following pieces in a kit:

If you’re new to model rocketry, it’s best to begin with a model rocket that was designed with beginners in mind.

Both of the following rockets can be flown again and again until they are lost or damaged.

Because they are small rockets, engine classes C and below are recommended, so you won’t be able to use a reloadable engine with them.

Fortunately, the cardboard engines are typically inexpensive and can be bought in bulk.

This set includes everything you need to launch the rocket, except for the motor. The motor will determine what altitude it will be able to reach. 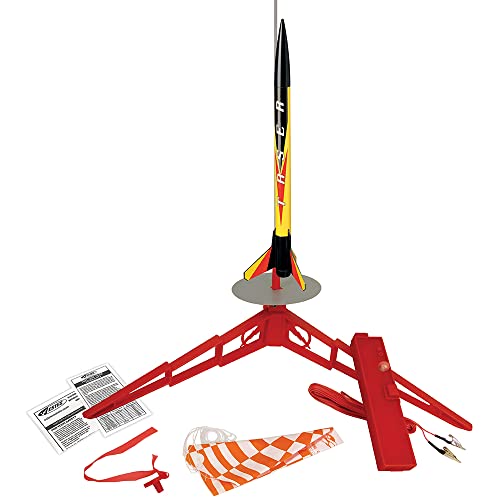 This set also comes with everything except for the motor. It was designed for someone who has never used a rocket before, so it’s great for beginners and children (with adult supervision).

The following engines are recommended for the above rockets:

Rocket engines determine the altitude. Each rocket should reach an altitude of about 1,100 feet (335 meters) with a C6-5 rocket.

Head over to my article on rocket engines and altitudes to learn more.

You can launch a rocket several times as long as it isn’t damaged. Engines, however, can’t be used more than once if they’re cardboard.

Metal reloadable engines can be used multiple times, but these engines are typically class D or higher and aren’t made for smaller rockets that are meant for beginners.