Farkle Rules – How To Play the Farkle Dice Game

Farkle is a popular dice game that dates back to the 1980s, though it has only been marketed under the Farkle name since the 1990s.

I have great memories of playing Farkle as a child growing up. It’s a lot of fun, doesn’t require much, and is easy to learn regardless of age.

The goal of the game is to be the first player to reach 10,000 points. This is achieved by rolling the dice each turn and racking up points.

The setup process for Farkle is fairly simple. All you’ll need is an open play space (like the kitchen table), a piece of paper on which you keep score, and six dice.

You may choose to use six dice for each player, but it’s important to remember that players will take turns. Some players do prefer to use a cup or tumbler to roll their dice, but doing so is not necessary.

How to Play Farkle

The first phase of each Farkle turn involves rolling all six dice. The dice are to be rolled simultaneously on a flat surface. This initial roll will determine how the player proceeds through his or her turn.

Upon seeing the result of the dice, the player must choose at least one of the dice to be a “scoring” dice. The player can choose to either Pass the turn onto the next player, keeping those dice as his or her score, or to roll again.

On the next phase of the turn, the player holds back the scoring dice and rolls whatever is left. If the player decides that he or she is going to hold onto (2) Twos, for example, the player will only roll the four dice that remain.

Players are required to keep rolling until they score at least 500 points, at which time they are given the choice to either pass or to continue to roll and score more points.

If the player chooses to continue to roll, he or she may do so as long as the player gets a scoring dice. If the player scores with all six dice over the course of his or her turn, the player will be allowed to roll six dice again.

In theory, a player may continue to roll as often as he or she likes as long as the player continues to gain points on each of those rolls.

If the player does not choose to keep rolling, though, he or she will keep any points that he or she gained during that round. If a player scores six hundred points on his or her first two rolls, for example, he or she can choose to stop rolling the dice and keep that score.

It should also be noted that a player can be forced to end his or her turn at any point when he or she gets a Farkle. A Farkle is a term used to classify a roll that has no scoring solutions.

Generally speaking, Farkles are more likely as the number of dice decrease making it risky to keep rolling too long.

Once a player either chooses to pass or gets a Farkle, play passes to the next player in the game. Regardless of anything else that happens during the turn, a Farkle brings the play to an immediate halt and the next player is given a chance to score.

Play continues to alternate between players until one player gets 10,000 points, bringing the game to an end. 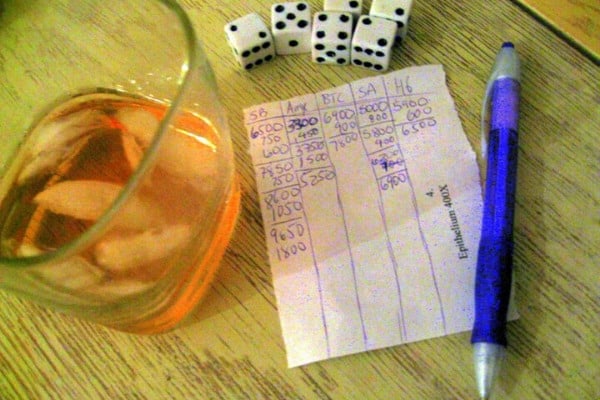 Scoring in Farkle can be fairly complicated. It’s best to look at what each dice is worth in a vacuum before looking at the various combinations.

On their own, only 1s and 5s are actually worth points.

The other numbers are, however, worth points when they are rolled together at the same time. Combinations are all worth more than single dice rolls.

There are also two other situations in which a player can score points.

It should be noted that all of these scoring possibilities have to come from the same roll. You cannot keep behind a 5 on your first roll, then add it to another 5 to get a pair.

The player chooses and declares what his scoring combination is with every roll, and thus must stick with that scoring solution until he or she passes or Farkles out.

A single Farkle not only ends a turn but it also erases any scoring done during that round. If a player scores 1200 points on the first two rolls but then rolls nothing but mismatched 2s, 3s, and 6s on the next roll, he or she will lose all of the points previously earned. If the player gets three Farkles in a row, the player will also lose another 1000 points.

Winning a game of Farkle requires a player to accrue at least ten thousand points. Note that the player does not have to stop playing when he or she hits that mark – players can and often do go far past ten thousand points when they win the game. This number is relevant, though, because it does change the state of the game from that point forward.

Once a player has hit ten thousand points and ends his or her turn, each remaining player is given one turn to try to beat the winning player’s score. If the first player stops his or her turn at 10,100 points, for example, the next player must score at least 10,150 points for the game to keep going.

Play will eventually continue until the first player has another chance to get the highest score. Play is brought to an end when subsequent players are not able to beat the highest-scoring payer’s score on their turns.

Most of the variants of Farkle have to do less with how the game is played and more with how it is scored. Some players choose not to require an opening score on roles, allowing players to pass even if they’ve only gotten fifty points on their first play.

Other versions of Farkle increase the opening score requirements, not allowing players to pass until they’ve hit the one thousand point mark. There are also several variants that give specific scores to triples, quadruples, and six of a kind for dice 2-4 and 6.

Another common variant has to do with how the game is won. To win, a player must hit exactly ten thousand – if he or she goes over, any points that he or she scores over ten thousand will go to the player with the lowest score. Other winning variants either increase or decrease the total number of points needed to win the game.