Many of us can remember making long chains of paper clips for fun when we were young, but for some of us, the fascination of interlocking metal pieces together never went away.

Learning how to make various chain mail weaves is definitely more complicated than simply linking paper clips together, and it’s important to master the basics before attempting really complex patterns.

However, learning the basic weaves is a lot easier than you might think.

Let’s take a look at a couple of the easiest chain mail weaves recommended for beginners so that you can develop a firm foundation in your new hobby, increase your skills, and master basic weaves which will be incorporated into other patterns as you progress in the craft.

Before continuing, you should know that once you understand the basic steps for a particular chain mail weave and develop a rhythm to your work, any pattern can be easy to do.

You see, all of the commonly used patterns (there are literally hundreds) are based on repetition.

So, once you’ve repeated the steps for a pattern a few dozen times, you’ll find that, as long as you remain focused, it’s just a matter of duplicating the same series of steps over and over again.

Truly, any chain mail pattern, whether of the European, Japanese, or Persian group, can become easy once you get the hang of it.

That said, beginners will be more likely to become hooked on the art of chain mail if they start with a very basic weave that isn’t going to leave them frustrated and disillusioned.

There are several weave patterns that are considered ideal for beginners to master before moving on to more complicated patterns.

However, most makers of chain mail would agree that the European 4-in-1 is the easiest weave to learn and should be mastered first.

When most people picture chain mail, the European 4-in-1 is usually what they imagine.

It is a classic, traditional weave pattern that was once the prevalent weave for making mail armor in medieval Europe.

Fun fact: According to Museum Replicas Limited, a full suit of mail would consist of approximately 1.5 miles of wire!

When the use of reliable firearms became widespread, protective suits of chain mail armor were suddenly ineffective, and the armor slowly faded into history.

The weave once used to create the armor, however, still remains popular today, as it’s an incredibly versatile pattern that can be used to create garments such as shirts or bikinis, a variety of jewelry items, historical replicas, and more.

From the name alone, you can probably guess that this weave is based on interwoven sets of five rings with four rings being connected to one.

When multiple rows are added, a ripple effect is produced as the rows of rings lie in alternating directions.

There are several different ways to make this pattern, and you’ll probably discover one that you prefer over the others.

No matter which method you use though, rest assured that you’ll quickly get the hang of the repetitive steps, and before you know it, you’ll be ready to move on to more complicated patterns.

Here is one way to start this weave:

Take the time to watch the following video demonstration of another common way to form the European 4-in-1.

The best way to learn this weave is really to watch it being done so that you can follow along step by step, but there are many tutorials in picture form that can be helpful too.

Chainmail 101 has one of the best photo tutorials that I’ve come across.

Tip: Use jump rings with a larger diameter when you’re first learning a new weave. The finished piece will be less rigid than those made from smaller rings, but you’ll be able to clearly see what you’re doing.

When working with small jump rings, I would recommend using a hands-free magnifying glass, like the one I use, so you won’t unintentionally catch unwanted rings or strain your eyes while you work.

After you become proficient with the European 4-in-1, you may want to consider trying your hand at the following:

For those of you who are ready to fully immerse yourselves in the many facets of chain mail, I would recommend investing in Chainmail Joe’s Complete Chainmail Kit. 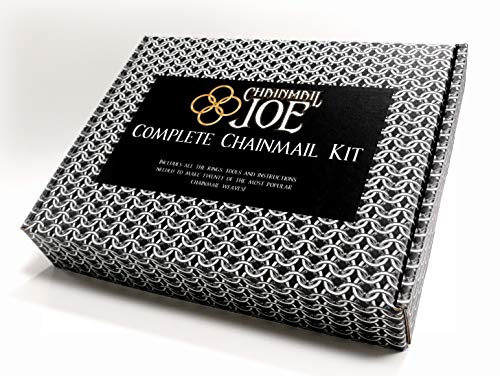 This kit comes with 23,000 jump rings in seven sizes, two bent nose pliers, assorted clasps, and a tutorial book – not a pamphlet – with instructions for 20 popular weaves and lots of color images with the specific rings for each step highlighted in red and gold.

(You can learn more about this kit and my other recommendations in my article “Best Chain Mail Kits.”)

If you choose not to go this route, after learning the European 4-in-1, the Byzantine and half Persian are easy weaves you should master next in your chain mail journey.

The Byzantine weave, another European pattern, at first glance, appears quite fancy and complicated, but it’s actually a fairly basic weave recommended for beginners.

This weave produces a rope-like chain as opposed to the rather flat European 4-in-1, which is often used to make both single strands and sheets of mail.

Each segment of the Byzantine weave is a 2-2-2 pattern, meaning that three pairs of rings are joined in a row before being manipulated to form the complex-looking design.

You’ll always be working with pairs of rings for this weave, but don’t let that dissuade you. After you’ve completed several sets, you’ll find your rhythm and be able to work quickly.

Personally, I found the following video to be super easy to follow, but if you prefer picture tutorials, complete instructions can be found at Artbeads and Chainmail 101.

The half Persian 3-in-1 is, as you may have guessed, the easiest weave to learn in the Persian group (often called family).

It basically involves linking three closed rings with one open ring, then adding another closed ring to the end and using an open ring to link the last three links in the chain, and so on.

When your chain is complete, you’ll notice that one side has a raised ridge running down the middle, causing the other side to feature a middle valley.

Like the other weaves, the repetitive motions will soon become second nature to you with practice. You can view a complete tutorial here.