What Is Tea Bag Folding?

Tea bag folding is not something that many people are familiar with, yet once you’ve given it a try, you instantly see the appeal. If you enjoy origami, tea bag folding is definitely worth trying.

What is tea bag folding? Tea bag folding involves cutting pretty tea bag envelopes into precise squares called tiles and folding them with origami techniques into wedges. The wedges are then joined with glue to form tiny, decorative pieces used to embellish items like cards and gifts.

You’ll be amazed at the creative possibilities of the humble tea bag pouch.

What better way to show that you care than to make handmade adornments to attach to greeting cards and presents?

We’ve all heard of placing used tea bags over eyes to relieve puffiness, but the bags themselves are not the only things that can be repurposed.

The art of tea bag folding gives new life to the little envelopes in which individual tea bags are wrapped. Why throw them away when they can be used to create lovely decorations and embellishments?

In tea bag folding, the paper wrappers of tea bags are folded into identical units (typically eight for most creations) and then joined to form a stunning, unique design.

With this craft, each individual paper is called a tile. Once a tile is folded, it’s called a wedge or a kite.

So, the final steps of a tea bag folding project involve uniting completed, identical wedges together with glue to complete the model.

Most tiles used in tea bag folding are about 2 inches square, which means that the little flap of many tea bag wrappers will need to be removed and the remaining paper cut down to a precise square before using.

Don’t feel like you are limited to only using 2 inch pieces though. If you stumble across some larger bags that you’d like to use, by all means, do so!

Feel free to cut away! Just remember that all of the tiles should wind up being identical in size and complimentary in design.

Also know that the smaller the tiles are, the more difficult it will be to fold them precisely, so be careful not to cut too small when you’re just starting out. Save those tiny images until you get a feel for the craft.

What Is Tea Bag Folding Used for?

There is a wide variety of decorations possible with tea bag folding. In fact, the need for a simple, yet beautiful, embellishment was behind the invention of the craft.

Rosettes, flowers, butterflies, and stars are all commonly made in tea bag folding.

People delight in adding these creations to items such as handmade greeting cards, scrapbook pages, and gifts for birthdays and other special occasions.

Some people frame their most lovely designs to hang on their wall. Another idea is to create a mobile-type decoration to hang from the ceiling.

Although she is not likely the first person to ever experiment with using tea bags to create art forms, Tiny van der Plas from Holland is credited with inventing the technique.

The story goes that in 1992, Tiny realized that she had forgotten to pick up a birthday card for her sister.

While she was sitting at her table drinking a cup of hot tea and contemplating what to do, she absently began to fiddle with the paper envelope of her tea bag.

They say that necessity is the mother of invention, and in this case that expression proved to be true.

Tiny’s mindless fiddling gave birth to an idea to use the little envelope to create a decoration for a homemade greeting card, and a new form of origami was born.

Of course, it helped that she was already a huge fan of origami art and had been practicing origami for many years.

Nevertheless, she unknowingly stumbled upon what would soon grow to become an offshoot of a paper hobby that has been popular for centuries.

In one of her books, written along with Janet Wilson, a fellow papercraft expert, Tea Bag Folding – A Passion for Paper, you’ll not only find inspiration but also a fascinating look at culturally themed tea bag folding from around the world. 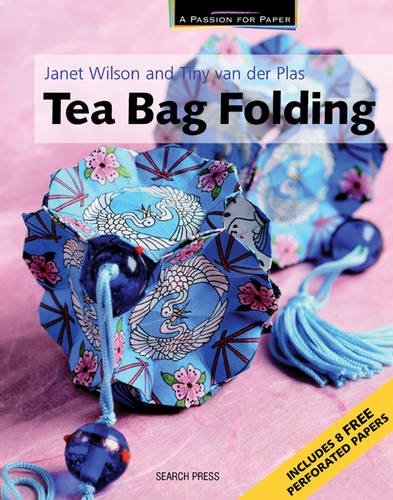 What Kinds of Tea Bags Are Used?

Really, any tea bag pouches can be used as long as you like the design and have enough identically sized tiles to complete the project you had in mind.

Although this art is based on the use of tea bags, some people prefer to use small origami paper instead, and this works just as well.

How Is Tea Bag Folding Different From Origami?

Tea bag folding is actually very similar to origami, so much so that it is often called miniature kaleidoscope origami.

The only real difference is that the wedges are joined using glue, which is not used in traditional origami.

If you’re interested in other forms of origami, be sure to read my article on the different types of origami.

What Else Can Be Made With Tea Bags?

Tea bags and their paper pouches can be used in a variety of ways, not just for folding. All it takes is a bit of creativity and a nudge in the right direction.

After mastering the art of tea bag folding, try your hand at a couple of the following fun ideas.

Used tea bags are already stained in one color or another, depending on the tea, which gives the paper an antique look.

Why not use this vintage look to your advantage and create little masterpieces on the “pre-aged” paper?

Once opened and dried, tea bag paper can become a mini canvas on which to paint flowers, silhouettes, stencil designs, or whatever else you’d like.

You can stitch together tea bags to make a larger canvas, or you can even print an image on tea bags with a standard printer.

To do so, print out an image sized down to tea bag size on regular printer paper. Tape the tea bag directly over the image and run it through the printer again.

Okay, technically, this craft does use new, unused tea bags still in their pouches, but I had to include it here because it’s such a great idea for handmade, thoughtful gifts for your kids’ teachers, members of your book club, etc.

Alternatively, you could fashion one of these trees to be used as a decoration around your house.

For this, use empty tea bag wrappers that were just too pretty to be thrown away or folded.

It is no problem finding directions online for making “upcycled” paper, but not many mention using tea bags and their envelopes. You absolutely can though.

Start saving all those that aren’t quite nice enough for tea bag folding until you have enough to make a few sheets of handmade paper.

Bet you never would have guessed this one! It’s true though.

Used tea bags can be carefully dried to achieve either a flat or slightly crumpled look, depending on your tastes, and then decorated using either paint or markers.

Once decorated, the dried tea bags can then be stitched on top of a quilt block to add interesting detail.

Because the tea bags are rather thin and slightly transparent, the fabric of the quilt can usually be seen underneath the bag, which gives the quilt an added dimension of beauty.

Note that this brilliant use of tea bags is only recommended for quilts that are to be displayed, not used.