Bunco is a fun dice game that comes down to luck. If strategy games stress you out or you easily forget game rules, Bunco is a great option as pretty much anyone can learn how to play.

How do you play Bunco? Bunco is typically played with 12 people split into groups of 4, with each player having a partner to form 6 teams total. Each group takes turns rolling the dice with the hope of rolling three of a kind to match the number of the round that is being played. First team to score 21 points wins.

This article will teach you everything you need to know to set up and play Bunco! 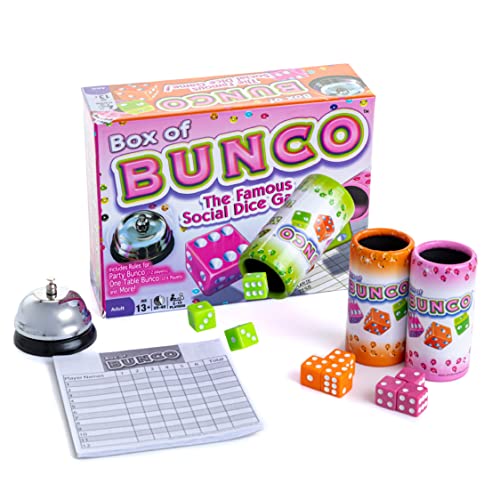 To play Bunco you will need tables, chairs, dice, score cards, and pencils for each player as well as dice, a bell or other noisemaker, and prizes to give away to the winners.

Each table should have 3 dice, 4 score cards, 4 pencils, and 2 notepads. The Head Table should also have a scratch pad for the scorekeeper and a bell.

Each player will pick a score sheet, and the players who choose a score sheet with a star on the back will be the ones who sit at the Head Table.

Number the other tables One, Two, and Three, and have 4 people sit at each table and divide into teams. Team members should sit opposite each other.

How To Play Bunco

Game play starts and ends with the Head Table. The Head Table rings the bell, and game play begins at all tables at once.

During the first round, one player at each table rolls all 3 dice at once. During Round One the objective is to roll as many 1’s as possible.

If a player rolls one or more 1s, they get to roll again. Each 1 they roll counts as 1 point and is marked on the score sheet.

The first player keeps rolling until they don’t roll any 1s.

It’s then the second player’s turn, and they keep rolling and marking points for 1s until they don’t roll any 1s, at which point play passes to the next player to the left.

Play continues with each player rolling until they don’t roll any 1s and passing the dice to the next player until a player at any of the tables gets 21 points.

If any player rolls all 3 dice at once and gets all 1s, they yell “Bunco!” and mark the Bunco spot on their card, getting 21 points.

The round ends as soon as a team gets 21 points, whether they roll Bunco or not.

Once a team gets 21 points, the Head Table rings the bell again, signaling the end of the round.

If a player is in the middle of a roll when the bell rings, they can continue to roll until they don’t get any 1s and record their points to be included in the round that is ending.

At the end of the round, the teams will move based on their scores. In a game with 12 people, the winning team moves to Table 1 and the losers will move to Table 3.

The team with the lowest points will also stay at their table, and one of the players will switch seats as well so that they are on different teams.

Bunco is when you roll 3 of a kind that match the number of the round, scoring 21 points.

Low Bunco is when you roll 3 of a kind that are lower than the number of the round, and it is worth 7 points.

High Bunco is when you roll 3 of a kind that are higher than the number of the round, and it is worth 5 points.

At the start of each round, each table picks a player to be the scorekeeper.

You can play up to 6 rounds or as many as you like. For each round, your intention is to roll the same number on the dice as the number of the round.

For instance, if you are on the third round, your goal is to roll as many 3s as possible.

If you roll 3 dice of any number that is not the same number as the round you are playing, that is a mini Bunco and counts as 5 or 7 points (see section above).

Except for when 3 dice are rolled at once and match the number of the round, each dice that is rolled that matches the round number is worth 1 point.

In other words, the number on the dice does not correspond with the actual point value.

When 3 dice are rolled at once that match the number of the round, that is called a Bunco. A Bunco is worth 21 points.

The player must yell “Bunco!” to receive points for the roll. They then continue to roll until they don’t roll any dice that match the number of the round.

When a player reaches at least 21 points, the round ends. Once the round ends, any players who are in the middle of a turn continue to roll until they don’t roll any points.

Each player should keep track of their individual score on their own score card.

There are also premade Bunco cards that you can use where you simply circle “W” or “L” for whatever round you have just finished.

Alternatively, a scorekeeper can keep track of everyone’s score on a master score sheet.

Whenever a player rolls a Bunco, they should make a tally mark in the space for Buncos. Only the player who actually rolls the Bunco records the Bunco; their teammate does not.

At the end of the sixth round, or however many rounds players have agreed to play, each player counts their wins and losses (marked “W” and “L”) and writes down their totals.

If there is a tied score between teams at the end of a round, the player with the most Buncos wins. If there is still a tie, then the winner is determined by a roll-off.

The scorekeeper starts the roll-off, and rolls the dice until they roll without rolling the number of the current round.

If the teams are still tied, they participate in roll-offs until the tie is broken.

The use of traveling items, ghost players, Head Table control, and scrambling are all variations of Bunco game play.

Can You Play Bunco With More Than 12?

If you don’t have enough players for everyone to have a teammate, you can create a Ghost player to sit in for the absent player.

Bunco baby is another name for a Ghost player. A stuffed animal or doll is usually put in the chair in place of the missing player.

Can You Play Bunco With 4 Players?

4 players or less can play a version of Bunco called One Table Bunco.

What Is a Funko in Bunco?

A Funko in Bunco is when 3 of a kind are rolled at the same time but they are not the same number as the round.

A Funko is worth 5 or 7 points, depending on whether the number rolled is higher or lower than the number of the current round.

Bunco is a fun and easy-to-play dice game that relies entirely on luck, and it is a great game for parties!