What’s the Difference Between Origami and Kirigami?

With so many popular paper crafts today, it’s often easy to become confused. While origami is generally well known, the art of kirigami is not.

The two paper hobbies are similar, but there are distinct differences as well.

What’s the difference between origami and kirigami? Origami is based upon a series of precise, geometric folds without any other alterations made to the paper, while kirigami is based on cutting and systematically removing sections of the paper with a knife or scissors to produce a desired end result.

Both origami and kirigami are fun, interesting hobbies that are popular across the world. Let’s look at not only how they differ but at similarities they share as well.

How Origami and Kirigami are Different

It is believed that both origami and kirigami can trace their roots back to ancient China shortly after paper was invented.

However, it’s assumed that origami gained popularity first and was ingrained in Japanese culture by the 1600s, while kirigami didn’t receive quite as much attention until the 1700s.

The rest of the world embraced the joy of origami much earlier than they did kirigami, as it was not well known outside of Japan until the 1960s.

In pure origami, the only alterations made to the paper are folds and creases. The completed origami includes the entire original paper with nothing added and nothing taken away.

In kirigami, cutting, taping, gluing, stapling, sewing, drawing, and the use of templates are all considered standard to the art.

When viewing an elaborate kirigami creation, such as an architectural model, you are often as amazed at what isn’t there as you are by the paper that actually remains.

This is thanks to the artist’s use of negative space, the empty space formed around the paper, and can have quite a dramatic effect, particularly when a white kirigami shape is set against a black background.

How Origami and Kirigami Are Alike

The most obvious similarity with origami and kirigami is that they both utilize paper to make interesting art forms. That, however, is not the only shared trait.

Of course, much more emphasis is placed on folding when making origami because folds are what the craft is based upon, but a kirigami piece usually starts with several folds as well.

In origami, most folds are permanent and become part of the finished model, but sometimes folds are completed only to be undone so that the resulting crease can be used in the next step.

In kirigami, the folds are often only temporarily placed in the beginning in order to achieve symmetrical designs before being unfolded to reveal the completed creation, though final steps in some designs call for folding to finish the project.

Both crafts likely began in China not long after the invention of paper before spreading to and taking hold in Japan.

Now, people all over the world enjoy both crafts, though origami is more well known and slightly more popular.

Sloppy work is not an option in either origami or kirigami. Both depend on accuracy to produce pleasing results.

In origami, if the folds are not precise, the next folds in the sequence may not be possible, and the end product won’t look as intended.

Kirigami does allow for a bit more creative license, especially if done freehand, but if cuts aren’t precisely placed, the finished piece will lack the symmetry that contributes to this art’s beauty.

Origami and kirigami can both produce creations in two and three dimensional forms.

2D examples in origami include a cicada, puppy, or a flat star. 3D origami examples are a flying crane, star box, working pinwheel, and hopping frog.

Of course, children and those with a creative streak have been experimenting with paper as a medium for art for centuries.

It wasn’t until the 1600s that origami began to emerge as a unique form of paper art in Japan.

The book Sembazuru Orikata by Akisato Rito, dating back to 1797, is the first known written instruction for the craft.

Akira Yoshizawa, considered to be the father of modern origami and rumored to have created more than 50,000 origami models, established a system of arrows, symbols, and diagrams in the 1930s, which help to standardize and simplify the way origami is practiced today.

According to a description of his book, Akira Yoshizawa Japan’s Greatest Origami Master:

“He served as a bridge between past and present – between the ancient traditional craft and the development of origami as a contemporary practice… was responsible for elevating origami to the status of an art form.” 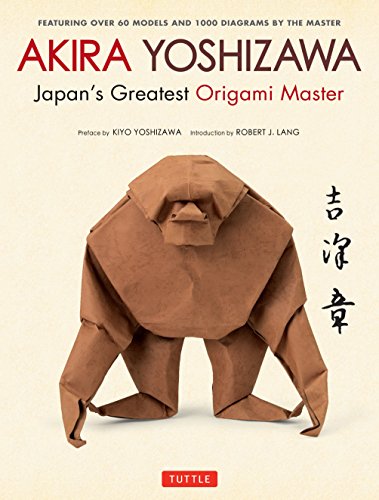 Origami uses a system of carefully creased, geometric folds to transform a single piece of paper into a decorative object. Origami paper is usually square and brightly colored.

Specially crafted origami paper such as kami, tant, or washi is most often used, but really, any thin, flexible paper can be used to create origami shapes, as long as it is cut into a square first.

Many pieces of origami begin with one basic series of folds, then progress with more complicated folds as the model takes shape.

Some of the most popular origami designs include:

The Art of Kirigami

You are likely more familiar with kirigami than you realize.

Have you ever seen pop-up picture books? Remember making paper snowflakes as a child? Well, they are both examples of kirigami at work.

Kirigami is the Japanese art of paper cutting. Through the use of careful folds and cuts, incredibly detailed, gorgeous creations take shape.

While most kirigami creations are purely decorative, some, like homemade pop-up greeting cards, do serve a function.

Traditionally, just one piece of paper is used, however, as many arts do, kirigami is evolving.

Now, many designs call for multiple pieces of paper that are taped, glued, stapled, sewn, or interlocked with neighboring pieces to form much larger, complex creations.

The term kirigami is formed from the Japanese kiru, meaning to cut and kami, meaning paper.

This word was first introduced to the United States in 1962 by Florence Temko’s book, Kirigami, the Creative Art of Papercutting.

Although kirigami was a relatively new idea to much of the world in the 1960s, this wasn’t the case in Japan.

Since the 1700s, the art of cutting paper has been an assimilated part of Japanese culture and practiced by both the young and old.

Interestingly, the Chinese had been making decorative paper cuttings out of colored paper, a practice known as jianzhi, for many years prior, perhaps even a century earlier.

These cutouts were used as an offering to their gods and ancestors.

Today, some things have changed, while others remain basically the same.

Those who stay true to tradition use just one sheet of paper, fold according to instructions, and cut either freehand style or by carefully following a pattern.

Other crafters prefer to draw designs or use a template as a guide for their cutting.

The drawing or template is taped to the desired paper before the crafter cuts through both pieces with a sharp knife.

If you’re interested in this method, I recommend using a self-healing craft mat to protect your work surface.

For an example of the template method for kirigami, watch the following short demonstration to see how easy and fun kirigami can be.